One of my favorite awards shows to watch is the Grammys, hands down.  I love seeing who wins, and watching the performances. And of course, I love seeing all of the various red carpet looks. I feel like people have a little more fun with their fashion at the Grammys, and last night was no exception. Below are my choices for best and worst looks of the night.

2.  Zendaya channeled a younger Halle Berry in this striped Vivienne Westwood dress, featuring a front leg split, and  it worked. The pixie hair cut shows off her gorgeous features and makeup. She is only 18, but her style is impeccable! 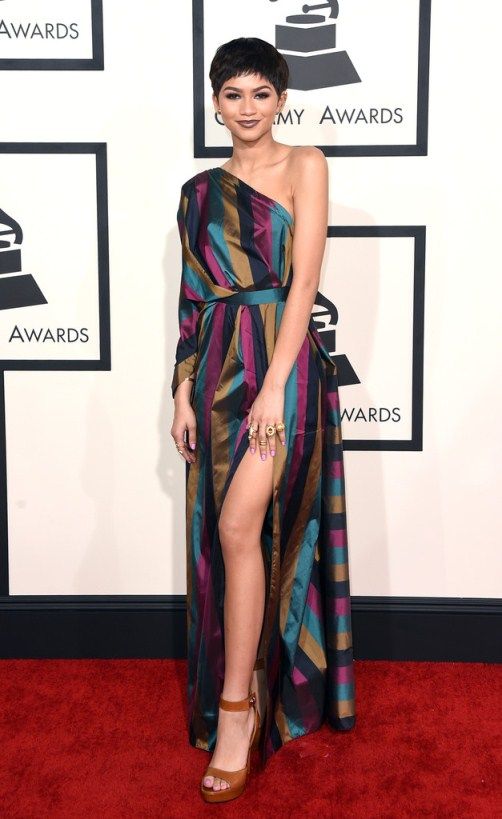 3. Nicki Nicki Nicki! She stunned in this sultry, all black Tom Ford gown. I love the look from head to toe, she is showing a lot, but not too much. Her hair and makeup look was one of my favs of the night. Subtly sexy. 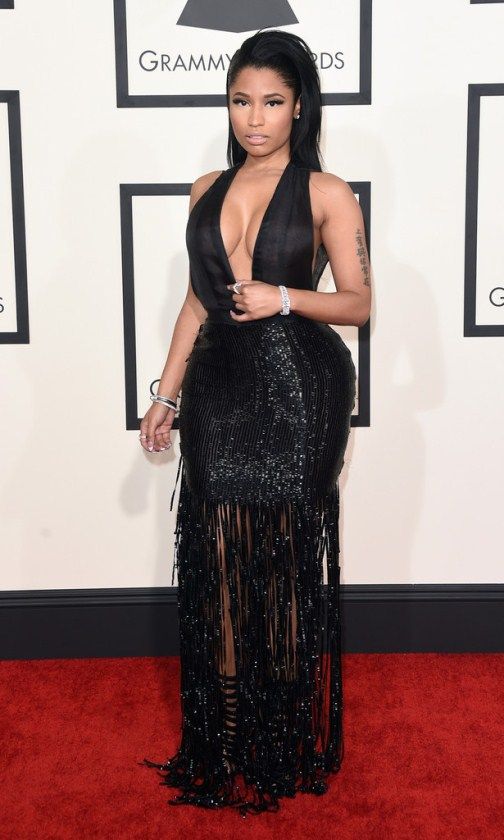 4. Coming in at number four was my girl Katy Perry. This is such a Grammys, super star look. Very attention grabbing, in a fun and pretty way. The Zuhair Murad dress is gorgeous, as well as her hair and makeup. She definitely was a stunner! 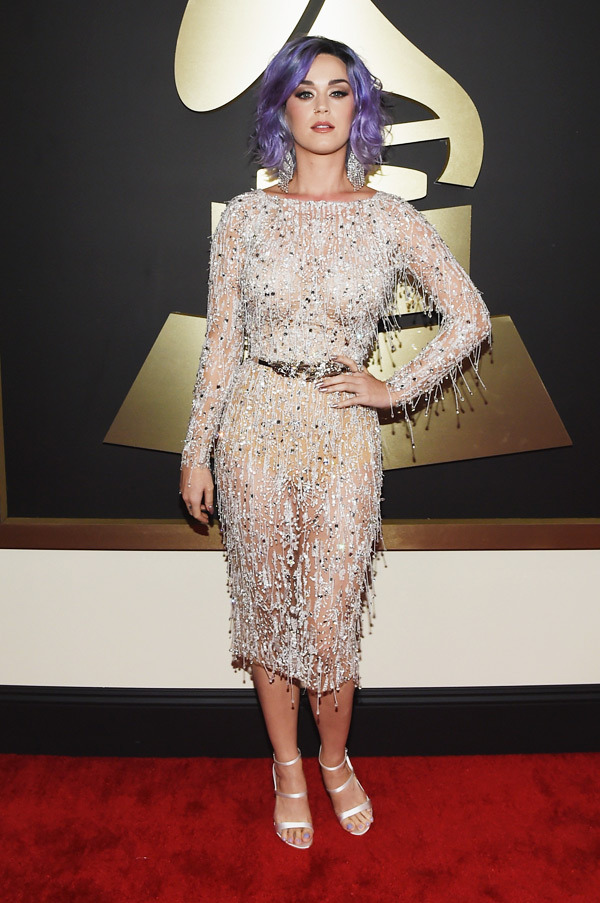 5. Next up we have Jessie J, who is rocking probably the most popular red carpet trend of the night: the sheer black floor-length gown. She wore the trend the best in my opinion, in this Ralph and Russo version. Very few people could pull off this dress, and she is one of them. The only thing I may have changed about this look was the hair, because it’s just kind of barely hanging in the back. Nevertheless, the whole look is gorgeous. 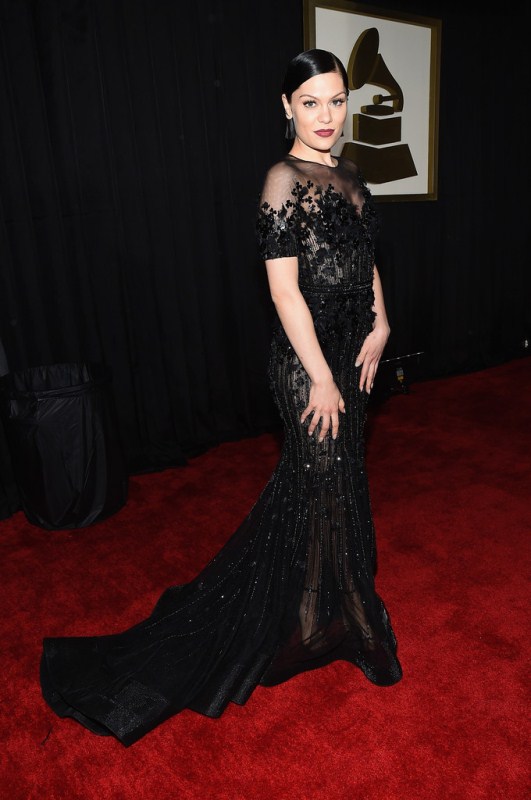 6. Iggy Ig is holding it down in sixth place in this fitted blue Armani Prive dress. As you can see, the cut out trend had a clear presence on the red carpet. I love the bright blue hue. This is one of my favorite looks of hers, minus that bird’s nest braid at the top of her head. Not sure where her hairstylist was going with that. 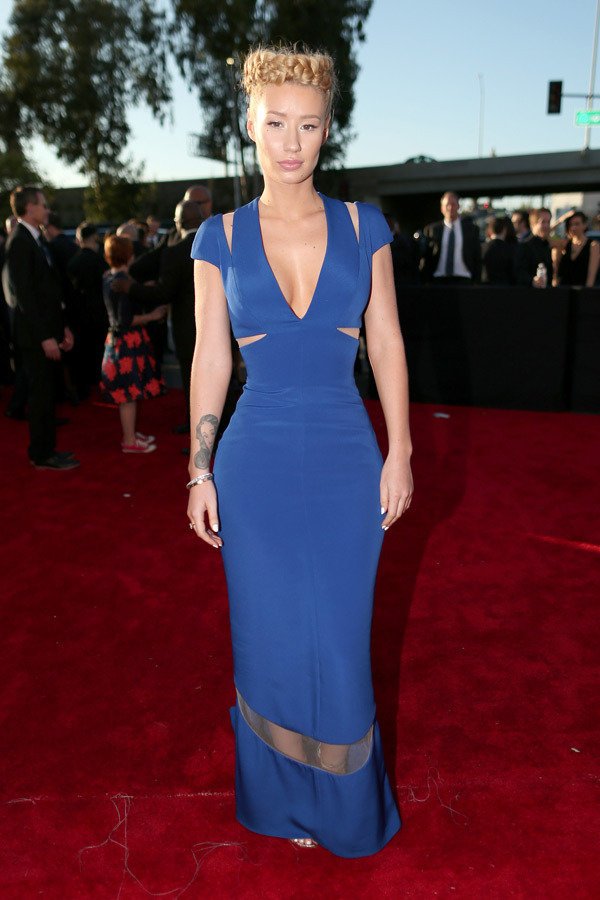 7. Then, there’s Gwen. She can do no wrong in my eyes. She always manages to come up with looks that are edgy, quirky, and sophisticated, all rolled up into one. Point proven in this black Ateleier Versace jumpsuit. Her swept back updo keeps the focus on her face,  as well as on the detail of the top of her jumpsuit. 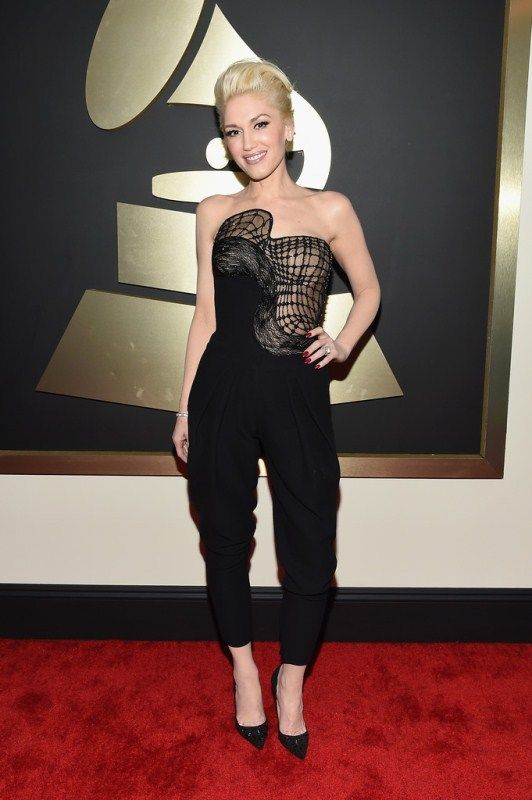 8. At this point, I think everyone knows I’m a sucker for an all white dress. So I loved this detailed Emilio Pucci jazzer on Chrissy. Love the accessories and make up as well. I just wish the detail didn’t almost expose her chest, and that her hair wasn’t all down. 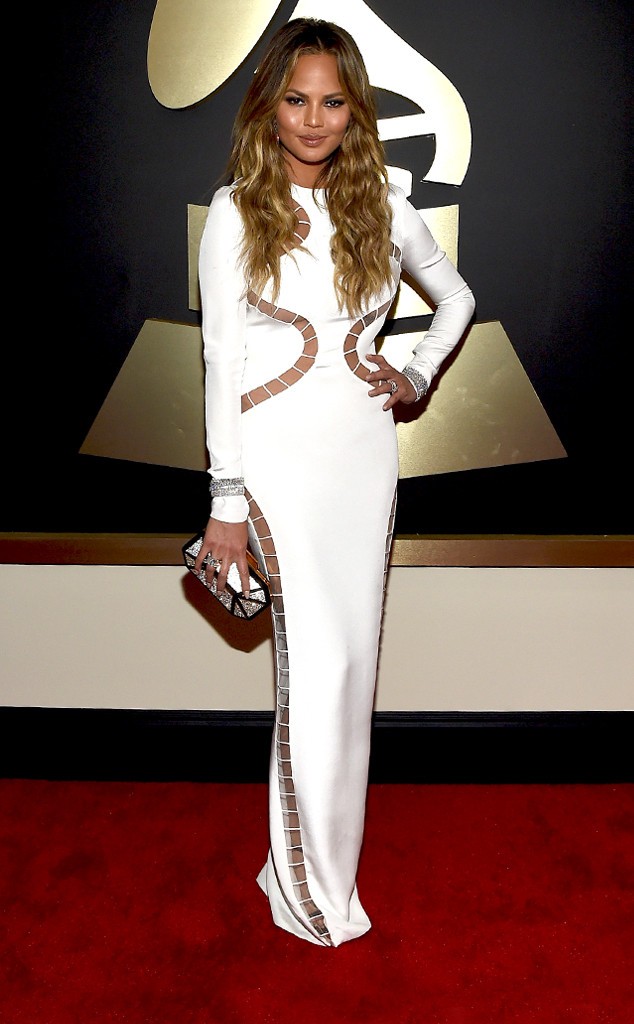 9. Second to last we have Ciara, serving us sexy and ultra feminine in Alexandre Vauthier . It’s so girly and pretty, and the fact that it is black gave it just enough edge for it to not turn into a frilly cupcake situation (like we saw on someone else). I would’ve paired a different shoe with this dress, but everything else is on point. Serve CiCi! 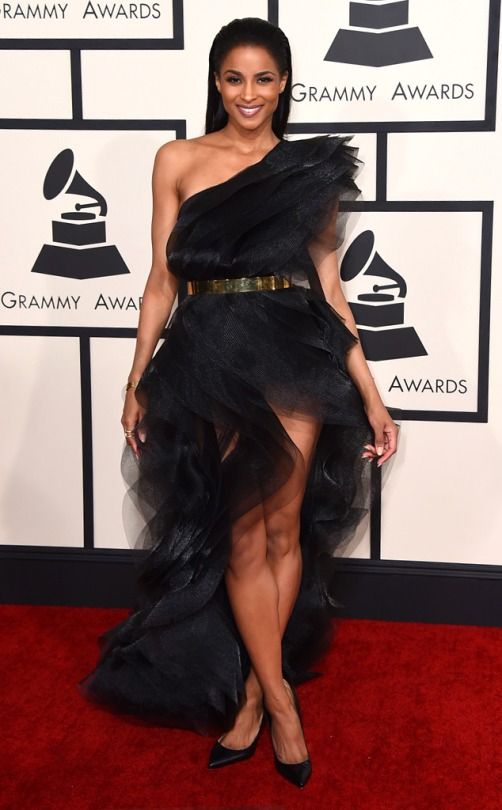 10. The last spot on my  best dressed list has to go to Rocsi Diaz in Jovani Fashions. I’m giving it to her because everyone loves a good sparkly, sequined, Grammy gown. Her soft waves and bronzey makeup compliment the dress very well. As you can see, plunging necklines were another strong red carpet trend. 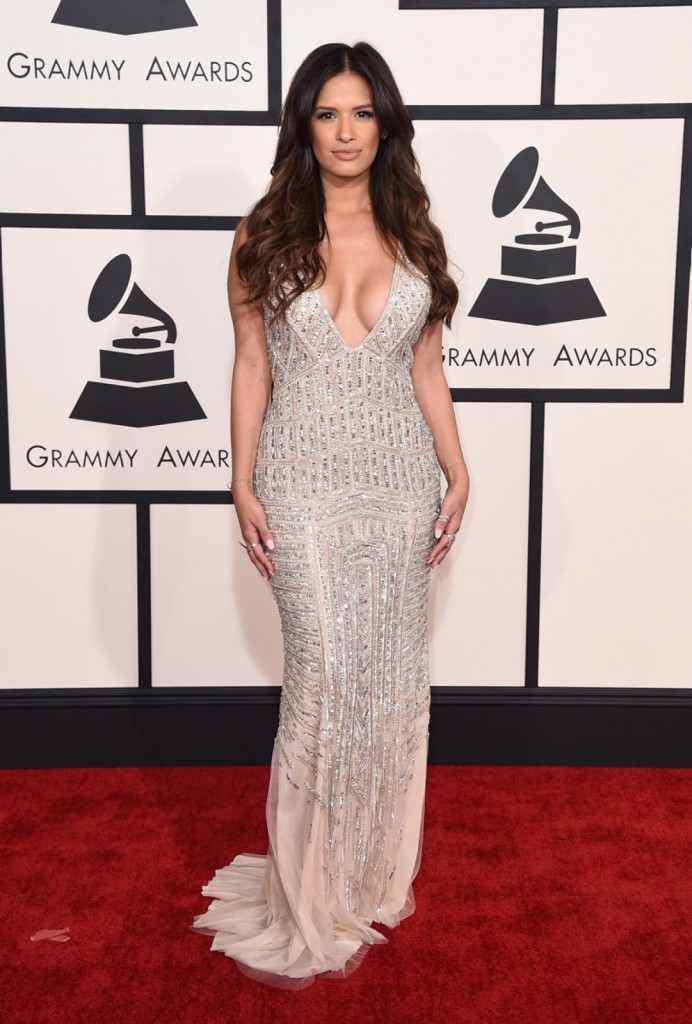 A few honorable mentions were Beyonce in Proenza Schouler (she didn’t make the top ten because we’ve seen that sheer, all black, floor length gown look on her a few times already), Kim K in Jean Paul Gaultier (the dress was borderline a glorified bath robe, but she was serving, and her hair and makeup combo was my fav of the night), and J Hud in Tom Ford (because her dress was all white and fit her well, but the look was a little too plain for the Grammys).

Best Dressed Male (going to keep this short and sweet): 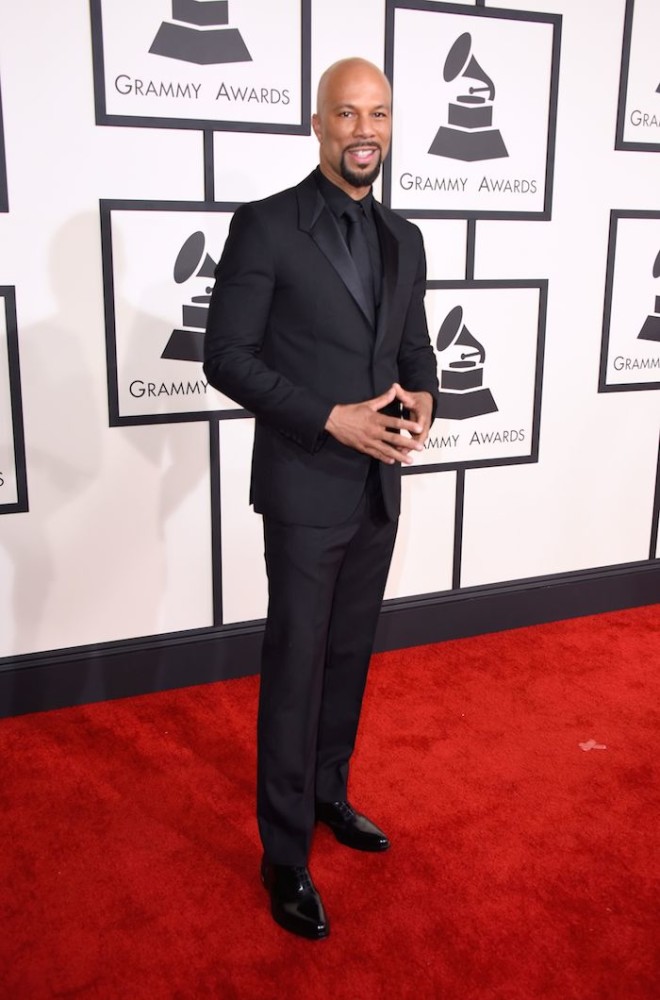 2.  John Legend in Dolce and Gabanna – I like that he stepped away from the traditional black and white, or all black tux. Very dapper. 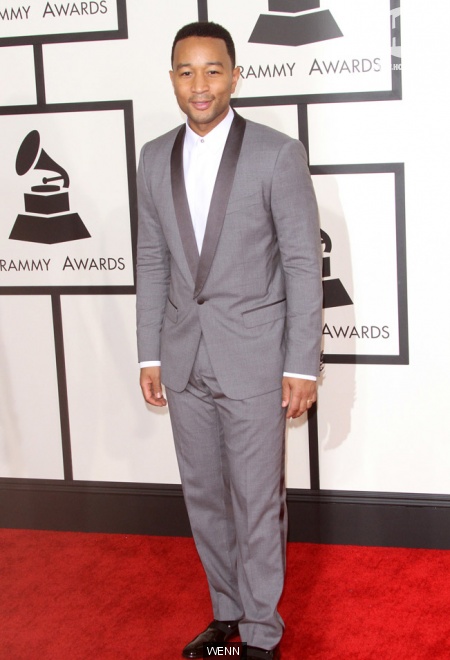 3. John Mayer  in Brioni – I’m in love with this tuxedo on John. It is so well tailored, and so pristine! The photo captures how handsome he looked in it, however, it doesn’t fully capture the gorgeous, deep navy blue of the suit. 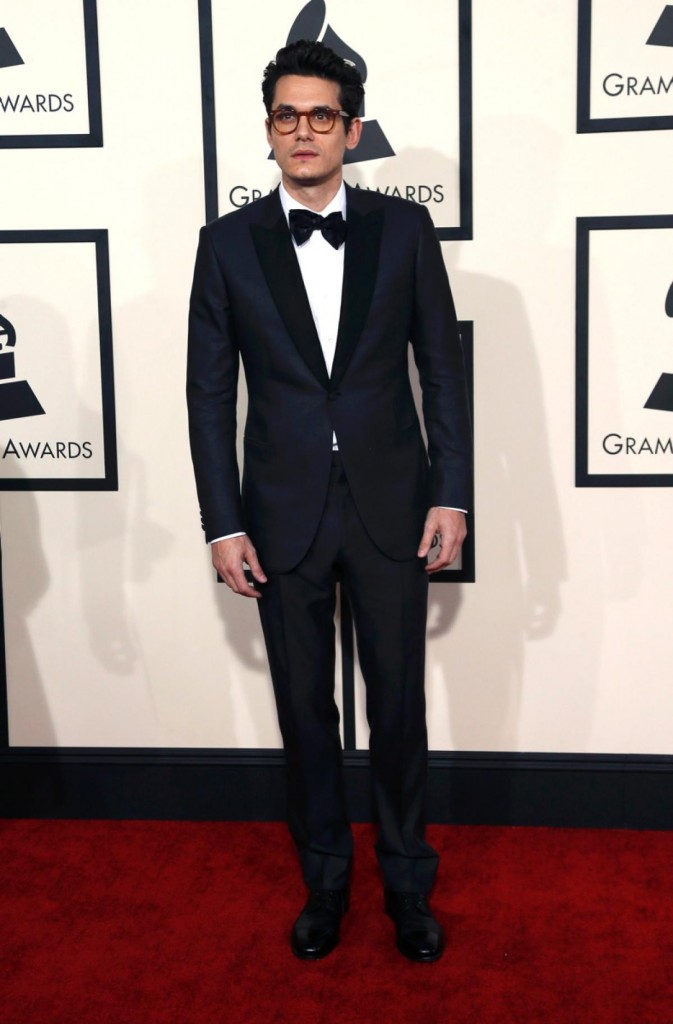 4.  Pharrell in Adidas – I’m always here for Pharrell’s shorts suits. He’s so cute and ageless. I’m going to go ahead and include this photo of him and his gorgeous wife just to get the fact that Helen was on my worst dressed list out of the way. I’m sure you can guess who her track/cat-suit was designed by… 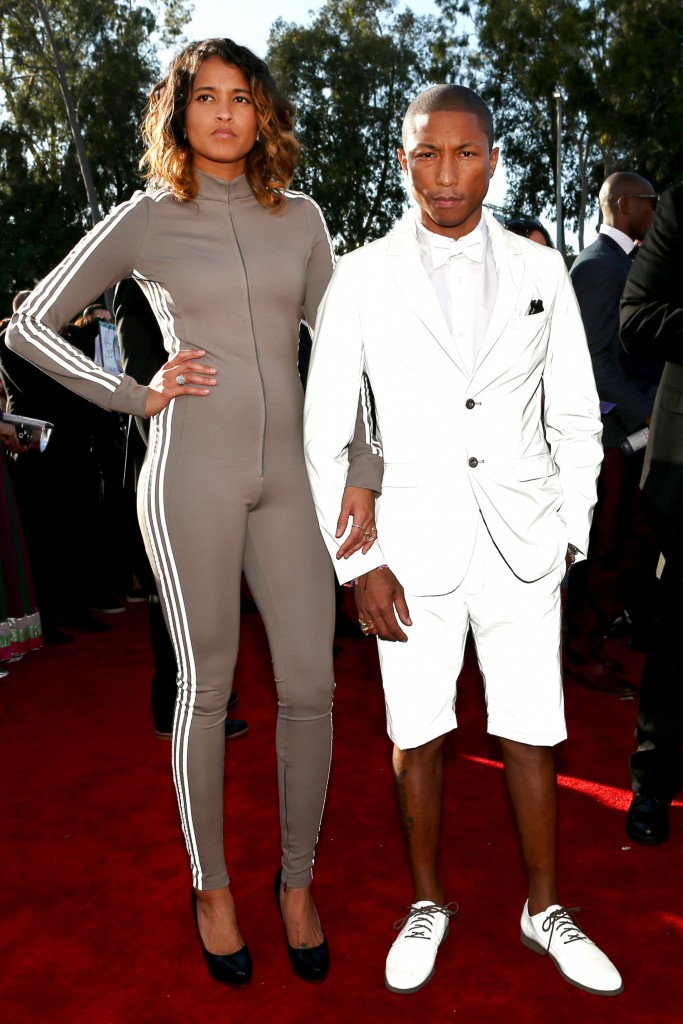 5. Nas in Givenchy – Like Common, he also looked dapper in all black. I used this picture of him, Madonna, and Diplo, because you guessed it…Madonna in this Givenchy costume is also apart of my worst dressed list. I know she’s Madonna and all but…I need her to stop…. 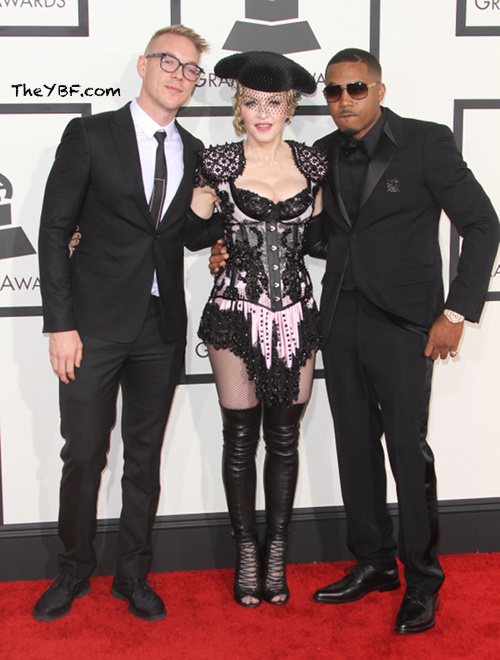 Honorable mentions for guys were : Big Sean in all black Saint Laurent, Ryan Seacrest in the blue and black tux jacket with black pants (unclear on the designer at the moment), and LL Cool J in his blue and black suit since he was accidentally twinning with Ryan (just would’ve nixed his signature Kangol).

On a final note, I must briefly touch on a few who were worst dressed in my opinion. Some were shockers, some were predictable, some were unknown, lol.

1. Rihanna in Giambattista Valli – When you’re Rihanna, you can kind of get away with something like this…but it’s not ok. It’s just…a lot of pink, and a lot of material. Her makeup and skin are flawless though. At least this look inspired people. As in inspired them to create a plethora of hilarious memes featuring this dress! 😀 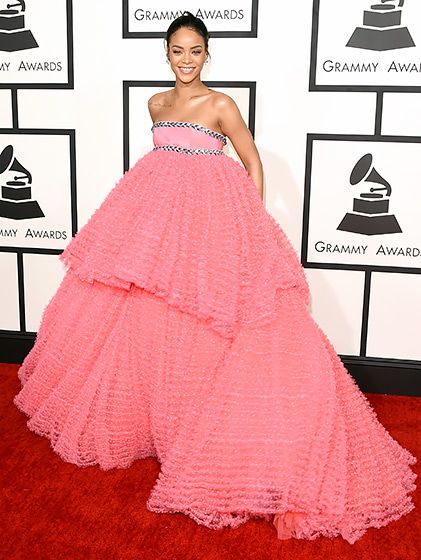 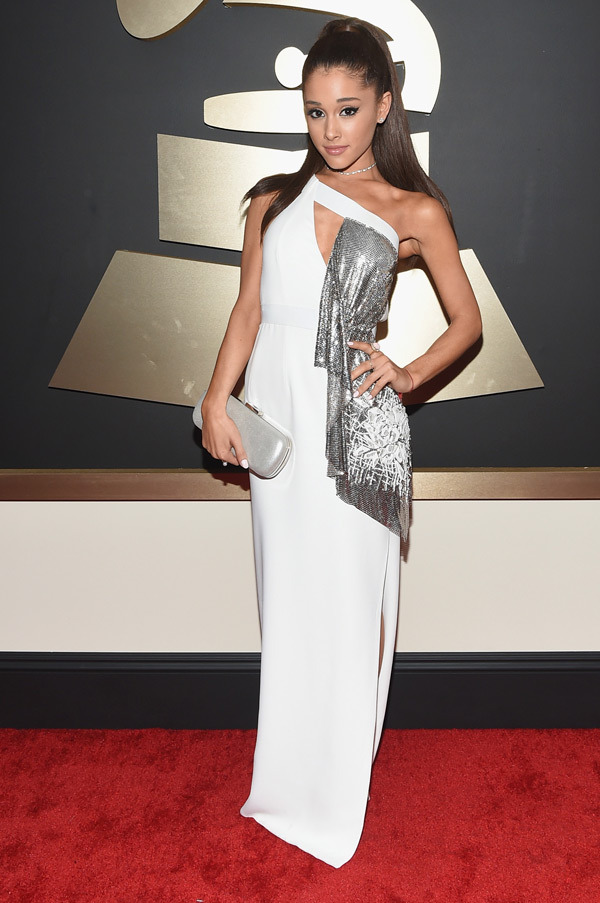 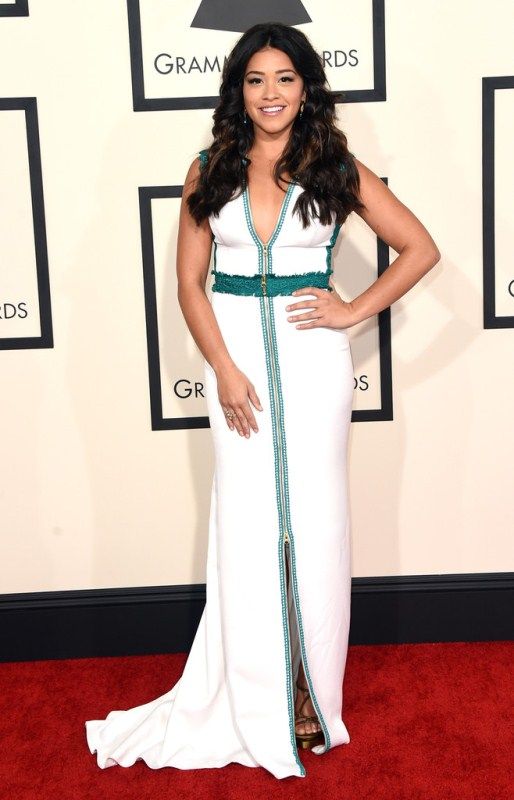 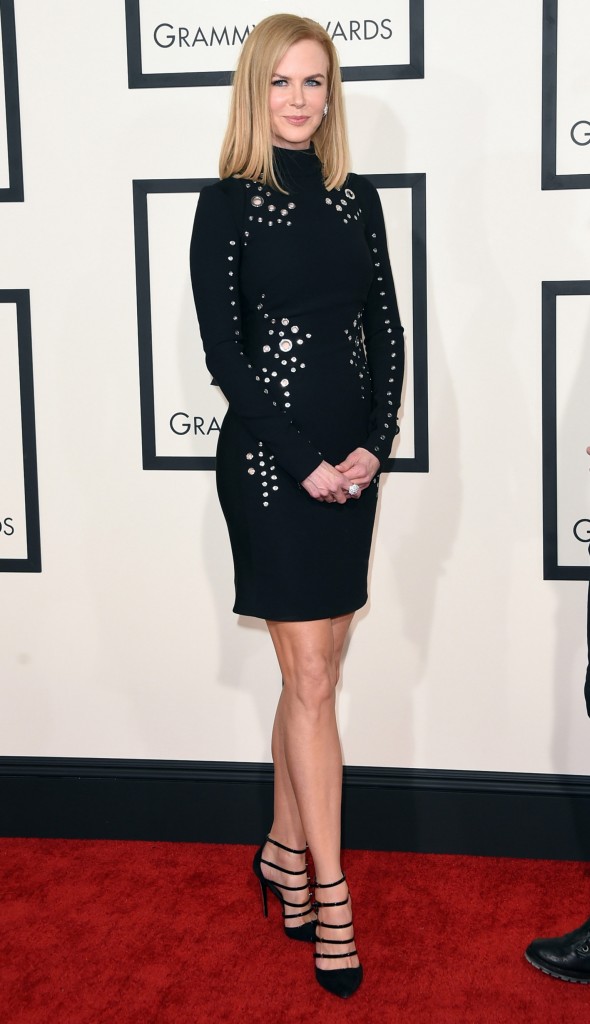 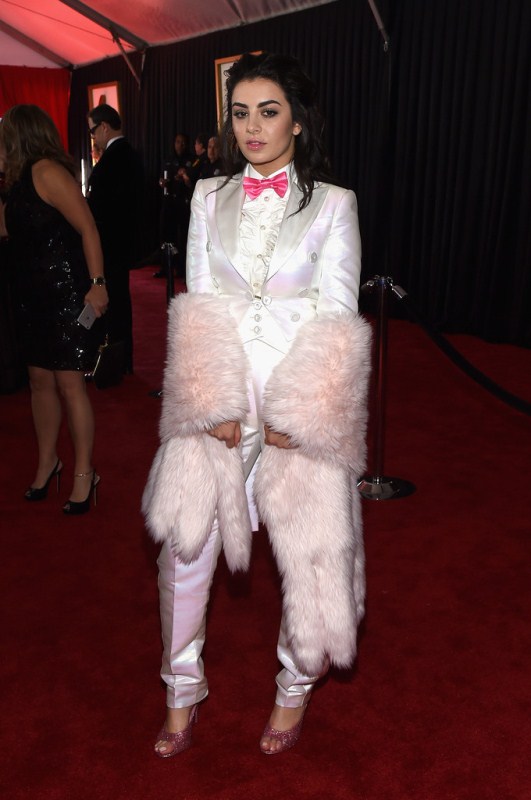 Last, but certainly not least, let’s hear it for the worst dressed guys (in my opinion):

6. Kanye West in Balmain – My main issue is the man cleavage, and the fact that the suit pants are tucked into those slouchy boots. No shade though, I still think he’s one of the dopest. 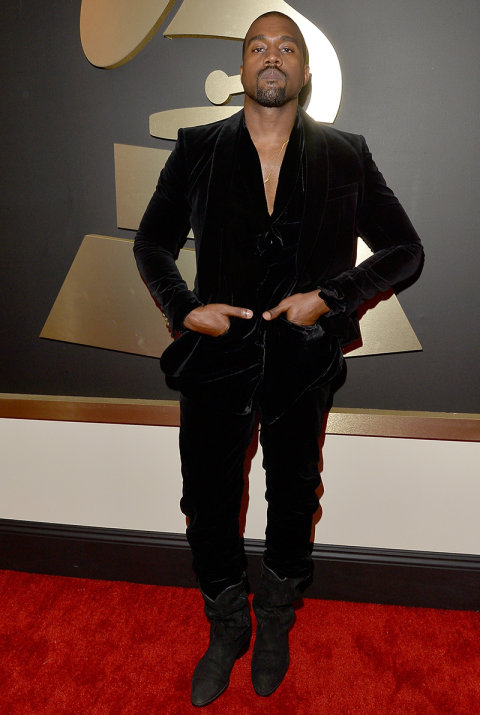 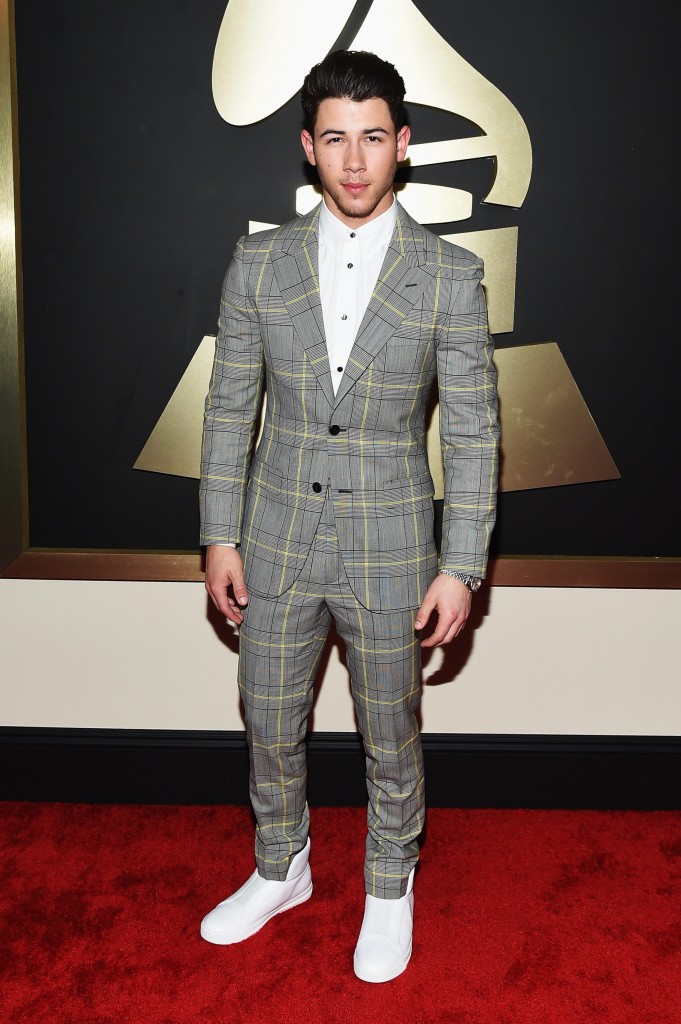 So that’s my 2015 Grammy’s red carpet round up! I’d love to hear your thoughts about the fashion as well!